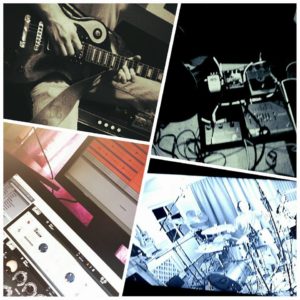 Velvet Bison – A 3 piece stoner band from down here in Peterborough. These guys came to the studio for a couple days to track two songs for a new 7″LP. Something that stood out with me on this project was the order of operations. When tracking on my own pace, it’s normally somehing like Bass and/or Drums first, then Guitars, Keys, Vocals, and little extra things at the end of the projects. Not These guys. Danny (The Drummer) comes in with this giant kit, and plays all of his parts to a metronome. Then Thomas (Guitars/Vox) steps up, does some scratch guitar takes, then belts out almost all of the vocals tracks used on these songs. Bass and Guitar weren’t even approached in a real sense until the next session entirely.

Once all was tracked, drums were edited in Pro Tools 11, then ported over for mixing in Ableton 9. Pro Tools just has a fantastic setup for editing drums (aside from them removing the fabled Tab+B trick). I’d love to get back into recording and mixing with PT on its own, but the work flow with Ableton 9 is something I’ve been using for nearly a decade now, it’s a difficult thing to just give up. The majority of plugins are all Slate Digital, with a couple extras like the Waves Puigtech series, and Soundtoys Little Alter Boy.

Take a listen to a snippet of one of their songs, Mammoths, right here.

Anyways, I had to break out almost all the mics in my collection, and even needed to rent some extras (5 toms and a cowbell on Dannys kit, I wasn’t prepared for that). To cap off this post, here’s a quick breakdown on the instrument-to-mic pairings: