Peace Sand Rest – Behind the Scenes 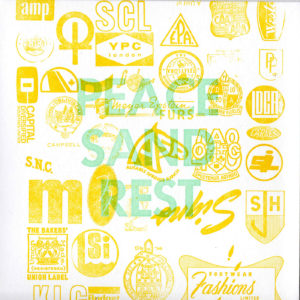 Hey everyone! Been a bit since my last post here as I’ve been focusing on the label, Okzygen Records. We’ve just had our second release with Peace Sand Rest’s debut album, including a fantastic release party/show at The Gordon Best here in Peterborough! Gonna be releasing the photos and videos from that show once everything’s been edited, but today I wanna discuss the recording process a bit.

We did almost all of the drum tracks for the album in a day, with the exceptions being Intro and The Interlude. Those two tracks were recorded separately from the rest of the album using a much more restricted 4-mic set up, with the D112 on Kick, SM57 on Snare Top, and two ART AR5’s for overheads. Scott (Drums) and Kellen (Guitars, Vocals) played the tracks together during the recording process due to the free flowing nature of the song. This gave us a more natural sounding rhythm as the drums were able to play off the lead, allowing a more improvised feel to some of the songs.

This is also the first album I’ve produced using the ART AR5 ribbon mics on overheads, and since then they’ve become my go to mics for that purpose. They produce a much clearer signal of the low ends, adding some much needed oomph to the toms (Yes, oomph is a technical term), while also smoothing out those shrill high frequencies from the cymbals. 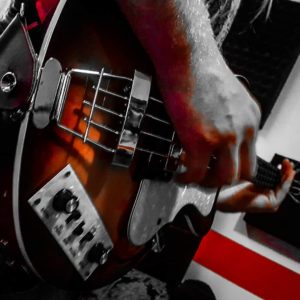 We also tracked Tim on the percussion elements on the same day as the drums. For him I set up a basic spaced pair overhead system of the Rode M3’s, with a slight tilt towards centre over his Congas. This way he was able to switch between the drums and shakers on the fly.

Evan tracked his bass parts the same day as the guitars, running mostly DI into the Scarlett 18i20. A couple tracks also included some layering of dirty distorted tracks running through his pedalboard. 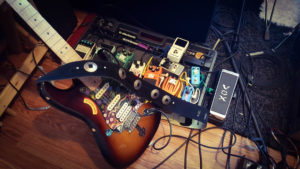 All the guitars (aside from scratch takes during the drum tracking) were recorded on a separate day from the rest of the instruments. We used two different amps for the album, the Traynor Custom 100H through a Marshall 1936 2×12 cab, and a Vox AC30 combo amp. I set up an identical pair of SM57 and ART AR5 on each amp, and we would simply switch from one amp to the next during each song.

The Waves InPhase plugin became a very useful tool during the mixing stage of the guitars, as there was some phase issues brought into play during the recording. If you’re ever tracking guitars with two mics at once, definitely consider checking out this plugin.

The vocals were done I believe the same day we did the guitars, using the AKG C3000 coupled with the Slate ML2. Due to the small size of the ML2 and a lack of a proper windscreen, most of those tracks picked up too many plosives and had to be scrapped. A shame really, because the Neumann U47 emulation was just fantastic on Kellens voice. It’ll just have to wait until the next session with these guys.

As mentioned above in the drums section, the Intro and Interlude tracks were recorded separate from the rest of the songs. Scott came in the studio and laid down all the instruments in a day. We used a 4 mic setup on the drums, and ran the guitars and bass DI using the Scuffham S-Gear amp simulator. The program has a very convincing VOX AC30 which fit in just fine with the other tracks.

Peace Sand Rest’s debut album is available now in the player below, and will soon be available on all major streaming/purchasing platforms!