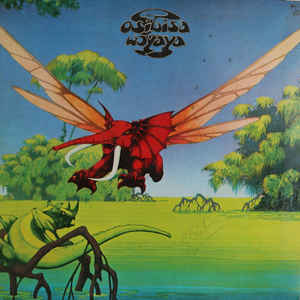 Like much of my record collection, this album came from my grandfathers stash. The artwork is definitely eye-popping, with a cross between a dragonfly and an elephant flying towards the viewer, in a fluorescent green orange colour scheme and stylized design. And it’s only up hill from here.

The group originates from various parts of Africa and the Caribbeans, who managed their way to England in the late 60’s. Armed with only their instruments and passion for their music, they exploded onto the scene, establishing the genre of world music in the public eye. Their music is infectious, fueled by an expanded percussion section and many other instruments. Saxophone, flute, guitar, bongos, flugel, piano, and a choir made up of friends and family are just some of the elements at play on this sophomore album. And everything is beautifully recorded, with a sense of space and atmosphere throughout.

At times the music seems right at home in the soundtrack of a Tarantino flick, with a large brass presence in songs like “Y Sharp” and “Spirits Up Above”. There’s a sense of grove and energy which makes the listener want to stand up and move, with an almost disco like feel to the percussion and offbeat drums. Writing this article has been difficult just because the music is playing in the background. It’s very distracting, in the best sense of the word possible. The performers themselves can sometimes be heard losing themselves in the music, and in one case accidentally interrupting a take.

Improvisation plays a large role in the group, with most songs largely consisting of instrumental solos and repetitive phrases. A large number of the tracks are instrumentals, showcasing the talents of the individuals, of which there are many. Each member cycles through many different instruments on the recording. The music takes on a jazz like feel, with performers going around in turns to land back on the same motif, and whatever isn’t improvised is incredibly catchy and well written. The band even experiments with odd rhythm structures and polyrhythms.

All in all the music is fantastic, a glorious example of how accepting the music scene of the late 60’s and early 70’s was. The undertones of religious experience and compassion are there, but it’s not The end goal of their music. The treasure they offer is a message of peace and love through the energy of drums and sonic vibrations, and the emotions that can swell in their performances is a religious experience unto itself.