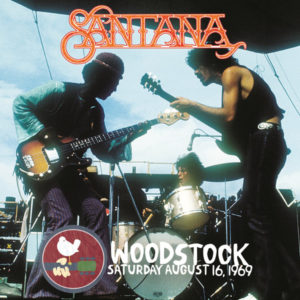 I can’t remember the first time I heard Santana. I don’t mean to imply that it never left an impression. My whole life I’ve been exposed to his music and ideas in many forms, whether through the sultry, seductive guitar playing through the speakers, or the general message of peace and love which permeates the character of my grandparents.

I remember in the early teen years sifting through my grandfathers record collection in the darkly lit basement, pulling out sleeves covered in esoteric figures, colourful spirits and elephants, and one in which the entire universe seemed to erupt out of the hand of a human anatomy figure. I knew these were going to be important to me, even if I did not have the means to play these giant black discs. I never anticipated that the medium of the music was going to later play such a role in my quest to understand it.

Fast forward about a decade, I find myself wandering around Zapp Records in Cobourg, where I discover a newly printed copy of Santana’s 1969 Woodstock performance. Knowing some of the history behind this particular performance, I grabbed the record immediately. This record is extracted from the original 8 track recording of their show done by Eddie Kramer (Jimi Hendrix, The Beatles, need I say more?) who later returned to do this new mix. And if there’s something that immediately came to mind when first listening to this album, it was just how incredible the mix sounded for being based from tapes recorded almost 50 years ago. It’s been given a polish, but still retains that raw energy.

This particular show has a lot of interesting history behind. Let alone the fact that it’s freaking Woodstock 1969, Santana had placed a rather large “handicap” on himself before the show started. Thinking they were not to go on stage for 12 hours, he had taken two hits of mescaline. Shortly it was revealed they were going on next. Being under that kind of influence yet delivering such a performance was a feat all on it’s own. Even with that additional distraction the entire band played consistently, with tight rhythms and numerous solos for all instruments. With a unique twist of Latin-rock and Blues, they went on to captivate the audience and skyrocket their career.

The talent shared by all the players is incredible, with everyone locking into their grooves with ease and playing off each other effectively. There’s a lot of focus on the percussion section, with many solos incorporated throughout the set, including a surprisingly effective hi-hat solo which transitions seamlessly into the song “Jingo.” Even with so many different percussion players, everyone is heard clearly placed throughout the stereo field. I know I’m getting a bit technical but whatever, it’s pleasing to hear everything in it’s place at proper volume.

Being so early in their career, the song choice is fairly limited, including mostly cuts from their first album along side a few covers. But that does nothing to hinder their ability to work those songs out for the audience. And the unique flavours brought by the combination of genres and artists really do captivate the crowd.

Speaking of the crowd, it’s worth noting the atmosphere of the show. All these people congealed into this field north of New York, some travelling hundreds of miles (yes, miles. It is the state’s after all) to join this group of like minded individuals, all there to celebrate peace, love, music and unity. They all believed in something, and that belief shows in the generation that followed. It’s subtle, but that event did change the world. People are still trying to captivate that energy, that feeling of a true paradigm shift encapsulated and delivered in the form of energy dispersed throughout air molecules in a rhythmical and harmoniously pleasing way. It’s this energy which made this event so unique, so unrepeatable, and it’s this feeling that people have been searching for ever since. It’s one I’ve gotten close to encountering, but there’s always a longing for something more.