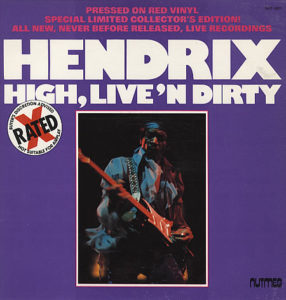 One of the beautiful things about music is that it’s all about being in the moment. Many of our favourite songs are in reality just an example of being in the right place at the right time. Sure, sometimes the right time happens to be somewhere within 4 consecutive days of being in the studio doing the same thing over and over and over and over again until the stars align and some mythical force drives the perfect sound through the instrument into a precisely placed microphone, through various bits of wire traveling into various bits of tube gear, coming out through two channels of a solid state recording console which feeds a couple of powered studio monitors, which oscillates the interconnected air molecules which fill the room, transmitting through the spaces between the speaker cone and the ears of the recording engineer.

Or, you know, you could just place a bunch of incredible musicians in a bar, give them all the consumables they want, and record what happens.

High, Live ‘n Dirty is a bootleg of a 1968 club show featuring Jim Morrison, Johnny Winter and Jimi Hendrix, making their way through various jams and reinterpretations of songs, including music from the Beatles, Cream, The Rolling Stones, and more. It’s a drug and booze filled rampage of chaotic musical expression, and expressions of another nature (Jim Morrison’s ridiculously vulgar outbreaks on side A are rather hilarious, if not a bit raw for oversensitive people who can’t take a joke). The cover features a rather large “X-rated” label on it, so people who get offended easily, you’ve been warned.

Let’s be honest; this recording is not the be taken seriously. Right off the bat it’s apparent that Morrison is pretty drunk, screaming into the microphone, dropping it, and eventually finding a harmonica (hint: it doesn’t sound great). It takes a while for everyone to lock into a groove at first, and there are times where some really great movements seem to get cut premature. This being a bootleg, the recording quality isn’t anything special either. Many times the vocals completely overpower all the other instruments, drowning them out completely, and a few times you can hear microphones being dropped.

That being said, between the absolutely incoherent lyrics coming from Morrisons face and the knowledge that most of the performers are completely strung out, this album is definitely something to hear even if it’s just for the experience. With the drop of a needle, you’re instantly transported back into this special moment of time when three great creatives shared a stage, among other things, and created musical history. How does such a ridiculous event get captured to be passed on for generations, shaping worlds nearly 50 years later? All because someone was in the right place at the right time.