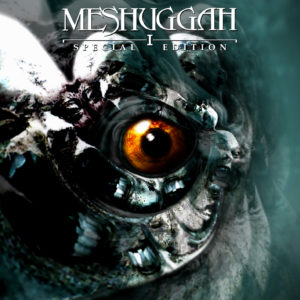 Math is at the core of pretty much everything we do in life. Ranging from the equations carried out within the human brain as synapses fire off neurons to different receptors which command your eyes to observe these words written on your screen and interpret them, to, well, other equations being conducted as the signals bounce from the satellites in space down to earth into you phone and are converted into streams of information which can be processed by the CPU and interpreted as a visual image displayed on your screen. Let’s face it, equations are everywhere, and this fact can put off many people. Especially when it comes to music. From the basic addition skills required to fill bars of music with different lengths of notes to fractions depicting odd time signatures, math permeates the very existence of music at its core.

Are you still with us? If not, prepare for a rude awakening with todays band, Meshuggah. Hailed as the creators of the genre of Math Metal, this Swedish band has been melting minds since the late 80’s. Throwing away the concept of standard time deviations, a key component to their sound is their completely abstract take on time signatures. At first listen it seems to just be a mess of randomly timed notes underlined with syncopated drum hits. But as you listen the hidden time signatures emerge, as the music is almost always based in 4/4 time at it’s core. You might have to count out 24 bars worth of music for it to come back around, but the structure is there.

I, released in 2004, is a single track, 21 minute long EP with serves complete justice in displaying their ability to bend time at their will. The song opens in a cacophony of drums and blistering guitar chugging for about a solid minute, eventually exploding into a solid wall of sound topped with a blood curdling scream. This album means business from the start, highlighted with the technically chaotic riffage to follow. The group is incredibly tight both in the studio and live, as is also shown in the recent remastered edition of I, which also contains live versions of Bleed  and Dancers to a Discordant System.

Another key aspect to the band is their extremely low and aggressive tone, accomplished by the use of 8 stringed guitars and heavy over-driven tones. Dipping around a full octave lower than standard guitars, the strings are capable of shaking full rooms on its own. Coupled with the subsonic pleasures of the bass guitar and mixed with the abstract time signatures, I  makes for a surreal metal experience for those who can tolerate a bit of math in their music. It’s much easier to experience the music than it is to explain it, so if you have 21 minutes to spare, check this out right now.