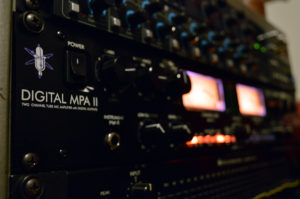 This is one of my favourite times of year, where everyone puts their prices down to the floor, and the studio can get the best upgrades for the lowest price! This last month there have been three new pieces of hardware come into Okzygen, all in the pursuit of the perfect recordings.

First off is the largest piece, the ART Digital MPA II. This unit completes the main recording setup here, adding two preamps to make a combined total of 18 channels available to record at any given time! On top of expanding the input count, these preamps allow much more control over the signal being captured, including a low cut filter, signal impedance control, phase inversion switch, and more. Also two big shiny VU meters, which I just freaking love. On top of being capable of all that, it also has both direct digital AND analog outs, which allow for signal duplication and manipulation through outboard effects!

The other two new pieces of gear are both microphones, and they’re also both quite stunning; The ART AR5 Ribbon Microphone and the AKG C3000 Condenser Microphone. The AR5 delivers this incredibly smooth sound, thick and juicy especially in the low end. I’ve been using this on guitars the last couple of weeks, and it ties the other mics in to create a complete picture, a big, bodacious, over-the-top tone with overdriven and distortion guitars. Gonna be interesting to see how it sounds on some other sources soon, and I’ve been thinking about getting a second for some stereo room mics. 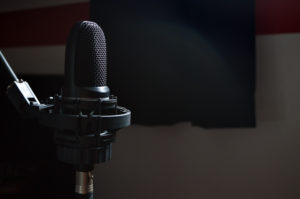 The second microphone is brand new, and will be the go to vocal mic for Okzygen Studios. After a 3 mic blind shoot-out with a Blue Baby Bottle and a U87 clone, this one came out with the clearest response and highest detail without being too harsh in the upper range (Thanks to Marcus, Tyler and Nicole at Maars Music for all the help in this selection, and many many more). I’m going to be using this microphone fairly heavily in the near future, especially when Velvet Bison make their return to Okzygen for the next project. In the meantime I have the C3000 set up for some room tone in some personal guitar tracking, so it’s only a matter of time until we hear how it sounds on some high gain instuments.