Funkadelic – One Nation Under A Groove 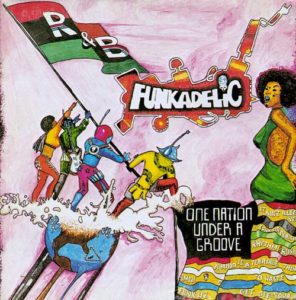 Do you promise to funk, the whole funk and nothing but the funk? Than buckle up, the mothership has landed, and Funkadelic has brought us the funk. One Nation Under a Groove is a lesson in the funk, the power of love and fried ice cream. Yes, fried ice cream is a reality.

Guided by the groovy thick psychedelic bass lines of Bootsy Collins, One Nation Under a Groove is a feel-good record for the ages. Released in 1973, the political messages found in One Nation Under a Groove are as relevant as they were in the ‘70s. While this is a depressing thought, it would be nice if we had made greater progress in the past 50 years, Funkadelic does not want us to fret. Rather, we should rejoice in the vibrations of the funk! Music to clean your shit by, music to relieve the feelings of depression so that you can attend to the social issues that would depress you. And, don’t forget, fried ice cream is a reality.

The stand out track for my personal taste is Who says a Funk Band Can’t Play Rock. With the message of musical experimentation and inclusion, the track brings attention to the elitism of some music fans. “I like X but anyone who likes Y is dumb.”, we are all connected, and music genres are much more closely related than many think. Shut up and Funk, mother funker.

Into You, makes a philosophic argument about the relative nature of morality. With lines such as “If it’s right, it’s all right for you now/ If it’s right, it’s all right for me now, yo-ho/ Any night you’ll be uptight until you find/ That the wrong and the right are within your mind”. While the lyrics also include denunciations of things such as the neutron bomb, which is a seemingly universal agreed upon principle, Funkadelic question the certainty of such claims. It seems, while we may think that everyone agrees with a premise, we cannot know if this is true because morality is subjective. In the traditional Funkadelic way, this thought is not meant to result in negativity, but rather bring us closer through love and respect of each other’s personhood.

So why don’t we all take a minute to think, it ain’t illegal yet, and spin some funk from the mothership.