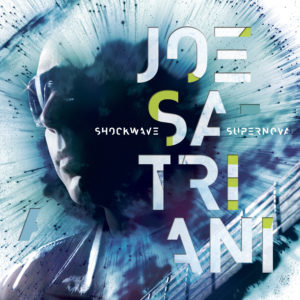 Many of the worlds greatest guitarists started out with an even better teacher. And about 25% of the time it would seem that teacher was Joe Satriani. Pretty much anyone who takes up the instrument with serious ambition for superior technical skill will delve into his many, many albums. I’ve followed his music for a while, keeping up with the last few albums, and occasionally treking down to Massey Hall to take in his concert as the tour rolled by. After hearing his upcoming album “What Happens Next” is going to feature Chad Smith (Red Hot Chili Peppers) and Glenn Hughes (Deep Purple, Black Sabbath), I decided to revisit his latest release, Shockwave Supernova.

Being the second album to feature a full time keyboardist in Joe’s sonic repertoire, the band seems to be on a much more solid footing than before with the keys being a more integrated part of the music, as opposed to feeling pasted on top as an afterthought. The first and title track opens in a flurry of notes, and captivates right off the bat. Like many of the tracks that follow, it sticks to Satriani’s generic song structure but keeps up an infective energy. Lost in a Memory follows up with a more ballad paced rhythm, which opens into one of the more epic chorus’ on the album, somewhat reminiscent of Ice 9.

There are a couple of moments in the album that raise an eyebrow, not in a bad way but at times he seems to be fully aware of some self parody. San Fransisco Blue is an homage to, you guessed it, the blues. There’s something about this song that isn’t exactly cringe worthy, but it follows the standard blues concepts almost too much to the tee. Most of the song is a standard shuffle tune with a basic 8 bar pattern. When the solo comes it offers a bit more of an improvisational feel, but just as it’s picking up real momentum into something really energetic, it cuts back into the standard trope of the blues tune. Even with all my nit picking, this damn song has been stuck my head for 3 days now, so there’s no denying it’s a catchy tune.

There are little surprise elements throughout the album that add a surprising amount of depth, such as a subtle use of electronic drums mixed in with real playing to create a more minimal atmosphere to build up upon (Crazy Joe).

One of my only issues, although it’s a pretty big one, is the bass seems severely underutilized. It’s easy to understand the reason why the parts are so simple as to not deter from Joe’s playing, but it would be nice to see the instrument really pushed and developed more. The bass tone however is fantastic, being thick and juicy like a properly cooked 8oz steak; the only problem is it leaves you wanting more.

Although the album plays more or less to Joe’s standard structures, the performances from all the instrumentalists are all incredibly powerful and helps to set this album apart from anything he’s released in the last 10 years or so. This only sets the bar higher for his upcoming album, “What Happens Next” which comes out January 12 2018. We’ll be checking that one out as soon as possible, so be ready.