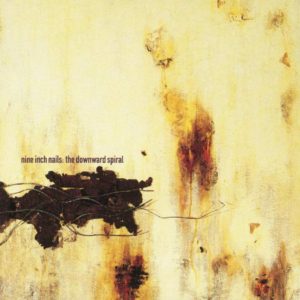 Nine Inch Nails came to me by accident, but at a time in my life when it was needed. Great music can do that, drag you out of a hole kicking and screaming, to show you that there are others out there that can relate, that other people share in your experiences, and that they can turn such anguish and anger into something beautiful. Beautifully terrifying and macabre, but beauty is in the eye of the beholder. As most of my experiences in music, it started with rifling through my dads CD collection. Among the various alt rock, hip hop, contemporary, country, and various other things that couldn’t grasp my attention, I found a slim jewel case featuring what looked like a terribly rusty razor blade, and a centipede curled up on the disc face. No other markings to discern other than the very limited words on the disc itself (nothing, NIN, halo eight), for some reason I knew I found something life changing before hearing the first notes.

The album is incredibly dark, filled with anger and hatred, partly inspired by the recording process itself. Trent Reznor, the mastermind behind Nine Inch Nails, took it upon himself to record the majority of this album in the prior home of Roman Polanski, the very home in which Charles Manson had his disciples slaughter five people, including Sharon Tate. Reznor recorded three releases while staying at the house, including Marilyn Manson’s debut album “Portrait of an American Family”. After The Downward Spiral had finished tracking, he moved the studio out, and shortly after the home was demolished.

From start to finish, the album is incredibly emotional and explores a surprising landscape of sonic possibilities. Opening up with a disturbing sample of a man being beaten (Taken from George Lucas’s directorial debut, THX 1138), the song explodes into distorted vocals and drums, creating a sense of chaos immediately. There are many jumps from heavy, full and demanding music to ambient, melodic bits of calm, which creates a sharp juxtaposition between the emotions explored throughout the album. Songs like “A Warm Place” and “Piggy” definitely diverge from the overall feeling of anger in terms of tone, but stays consistent in subject matter.

Part of what makes the album so interesting is it’s overall theme. It’s a sort of auto-biographical record of a descent into darkness, reflecting many of the events in Reznors life at the time. This personal connection to the music is reflected in the sheer rawness of the performances. The cracking in his voice during “Hurt” is real, so real that it convinced Johnny Cash to cover the song. His screams on “The Becoming” are authentic, with such a raw sound that my throat hurts just listening to it.

I don’t want to spend too much time just writing about this album, because it’s something that needs to be experienced. It is without a doubt one of the most important albums of all time, a self portrait of self abuse and self control. If for some reason you’ve not heard it yet, I’d suggest not listening to it for the first time around delicate people who offend easily. And if you do, make sure there’s as many delicate people in the room as possible for the greatest effect.