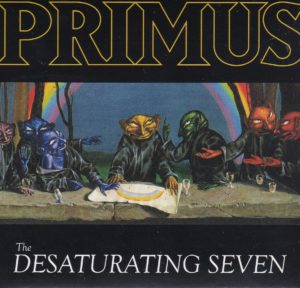 So It’s been a bit since my last review. Things have been busy here as they always are, we’ve begun work on a new album for local guys Peace Sand Rest, been working away on the upcoming Velvet Bison record, and there’s a few new Okzygen original projects on the go too. Rumors are abound of a record label, but that’s a discussion for another day. For today we’re here to experience colours through sounds.

I’m not speaking about Synesthesia, the medical condition where people experience various sensations triggered by audio stimuli, including hearing colours. We’re actually listening to Primus’ newest release, The Desaturating Seven. Alex sent me this one a while ago, late last year, and I’ve been intending to do this review since then. But as it is with almost everything Primus makes, it’s hard to put it into words. The album is based on an Italian childrens book, one he used to read to his own kids when they were growing up. Inspired by the vibrant graphics and use of colour, the band embarked on making this musical counterpart.

The album is pretty tame compared to almost all other releases, exploring the more traditional sides of progressive rock. This album is the first time that I can recall them using a 7/4 time signature, used to emphasize the seven coloured goblins. At just under 35 minutes long, this is also their shortest effort, which isn’t necessarily a bad thing. It doesn’t drag on, even though the album has many quiet and dramatic moments interspersed throughout, juxtaposed by your typical weirdness you expect from Primus. The short length is also a bonus when you consider different listening formats as well, as I’m currently spinning the splatter vinyl version as I write this.

Even with a more restricted length and a reserved style to accompany the story of the album, these limitations do not stand in the way of the band getting in their funky grooves and overall absurdity. The album opens up with narration provided by Justin Chancellor (of Tool fame), who plays the role of the Goblin King throughout the album. As the narration ends, Les Claypool lays down some ridiculous upright bass rhythms over Tim Alexanders ambient drumming. This is also Alexanders first album with Primus since 1995, reuniting the original lineup with Larry Lalonde on guitars.

As a Primus record, die hard fans might be underwhelmed by The Desaturating Seven. But from a musical standpoint, the album is solid, with lots of emphasis on rhythm and bass, intriguing changes in time and tone to keep the listener interested. Injected with that unexplainable creep factor that Primus injects into their music, this album will have you checking for multi-coloured trolls underneath your bed before you sleep.