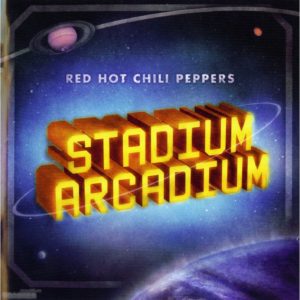 Full disclosure out of the gate, I am a HUGE RHCP fan. The band has shaped my own playing and provided many great memories. However, I have always been taken aback by the reception to their 2006 album Stadium Arcadium. Fans and the band alike seem to think of Stadium Arcadium as a vessel for a few songs but little more. The fact that during their 2017 appearance in Toronto only 1 song from the album (Snow) was performed demonstrates the weird space this album fills in the band’s catalogue. Sure, there are some hits on Stadium Arcadium such as Dani California and Snow; but I believe the album is so much more than that.

I will acknowledge my possible bias up front. The album was released in 2006, at which time I would have been 14 years old. A great time for the record to come into my life. The songs about new love would never be as relevant as they were at the time and I still had the energy for frenetically spastic movement brought on by some of the more energetic tracks. The overarching laid back vibe was perfect for cruising down the road on my skateboard or bike. Perhaps these are the reasons the album means so much to me personally. However, there is an undeniable quality to the tracks that supersedes all these personal experiences.

Tracks like Tell Me Baby, Strip My Mind, and Torture Me are introspective and sonically impactful. While tracks like Hump De Bump, Readymade, and Storm in a teacup are up tempo funk jams that make the body convulse. I have always wondered about the lyrics of Readymade. I would love to know what “I’ve gotta sister making babies/ With a Black and Decker blow torch” means. It is precisely the diversity of sounds on Stadium Arcadium that make it great. There are detractors from this point of view. Some have referred to the deeper tracks as filler. “So what if there’s a healthy dollop of filler here? If you condensed ‘Stadium Arcadium’ down to 10 tracks, you’d be left with something special – that’s what MP3 players were made for. The biggest charge we can levy on these Californian raisins is that of nudging the death of the album that little bit closer”- Tim Chester NME. (Source)

But this is my main contention, and ultimate disappointment: have we as listeners regressed to the point where sonic depth is a strike against an album? Have we gotten to the point where the attention span is so poor that we cannot take the time to find the beauty in less obviously hit songs? Perhaps. I am not filled with anger in response to this, of course we shouldn’t force ourselves to like everything. God knows I have music I don’t like. Rather, I am concerned about the iPod-ification of music. It seems many people take two or three songs from an album or artist and never take the time to seek out the bands catalogue. Having taken a look at many people’s phones or iPods, I find it disheartening when I go to an artist and find one song. I’m not angry at the person for their choices, rather I am disappointed that they are missing out on great material. I believe this is the case with Stadium Arcadium. Those who enjoyed the singles, either didn’t take the time to seek out the deep tracks or they were not willing to give them a shot because they are not sonically identical to the single.

This complaint may point to a larger positive. It may be the case that we have developed this strategy of harsh selection as a result of time/ technological constraints. Take the set from Toronto I mentioned at the beginning of this review. The band had a set amount of time they were able to perform. At the time RHCP had 10 full length albums of material. It is entirely likely that the choice to exclude much of Stadium Arcadium was a result of time constraints and choice fatigue. When we have so much great music we don’t need to spend the time finding the good things about deep tracks. Rather we have all become music critics, and if a song does not immediately connect we move on. There’s not enough time in the day and we have so much great music to listen to. In the past this problem was also present in technology. Our phones and iPods, at this point, have almost infinite space. And if we do somehow run out of space there are apps such as Spotify that have cloud storage for even more material. As such, the technological constraint has been eliminated. So, will we listen to records in their entirety ever again? Obviously, it depends on the person, but I think some albums are worth listening to in their entirety. Stadium Arcadium is one of these albums. The sonic changes are welcome and interesting. There are few songs I do not genuinely appreciate for their own merits. It is not a necessity to listen to the album front to back because it isn’t a concept album, at least in the traditional sense. But the twists and turns of the record make the full listen more fruitful than a pick and choose method. Personally, I cannot put the album on without finishing it. Which can be a problem with a run time of over two hours. The songs just tie together so well and keep my attention. This may be a commendation of Rick Rubin who produced the album as much as the band themselves. All this being said, if you haven’t taken the time to listen to the full record I encourage you to do so, I would place money on the fact that you will come out the otherside not regretting your choice.