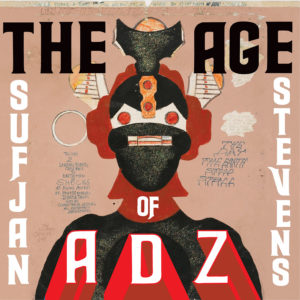 A dilemma that most artists face at one point or another is deciding whether or not to maintain their current approach and style to the music they make, or taking an entirely different direction. They might take an inspiration from the current state of their life, employ instruments that they have neglected or ignored, use a different style of mixing/production or take on an entirely new genre. While results can be mixed, on occasion, something really beautiful is made, something really outstanding and unique, like Age Of Adz, Sufjan Stevens 6th studio album, released in 2010.

It should be said, first and foremost, that this isn’t the best place to start with Sufjan. My introduction to him was his 2005 release, Illinois, a concept album revolving around real and fictional events and people from that midwestern American state. This is his most well received album, and the reception has only become warmer since its release, becoming certified gold by the RIAA within the past year, indicating 500,000 copies sold. I had recently read that, quite correctly, it’s absurd that a christian indie-folk artist with a near unpronounceable name would actually achieve sales that merit his artistic and commercial reception.

Age Of Adz  is in a lot of ways, the antithesis to Illinois. While it is still unmistakably Sufjan singing on these songs, his singing is much louder on most songs and heavily filtered, echoed or otherwise distorted. The instrumentation is still extremely diverse, but often favours synthesizers and drum machines, while still reserving some space for the more traditional instruments that made the last album so notable. Lyrically, instead of focusing on the myths and stories of a place in America, this album is much more about Sufjan’s personal struggles, particularly with his own faith and mortality.

Ultimately, if Illinois is a big, beautiful, almost cartoonish creation, Age Of Adz is decidedly as grandiose, but tense, fearful, weird and ultimately difficult to listen too. But with patience and close listening, I would argue, that Age Of Adz is not only Sufjan’s best record, but one of the best of the decade so far.

The album begins with Futile Devices, a quiet, sparse track that mostly consists of Sufjan’s voice, singing about love and admiration towards someone caring for him, and all that he can’t convey, while strumming an acoustic guitar. It’s a stark contrast to the rest of the album. This segways, with a loud, distorted electronic crash that slowly morphs into a series of electronic drum beats, beginning the next song, Too Much, a mix of off-tempo electronic squelches, keyboards and claps. Sufjan sings here about regret and the weight of decisions made as the song builds to a second half of even more manic instrumentation. The chorus repeats until the song ends, but changes in harmony and instrumentation are constant. Violins and flutes are added towards the end to create something that sounds almost menacing.

The next track, the title track of the album, I believe Sufjan sings about religion, reincarnation and decay. His heavily distorted voice shifts to something clearer as a choir begins to sing alongside him, accompanied by loud horns, sleigh bells and violins. Between choruses, synths and pianos twinkle in and out, while drums echo.

I Walked  takes an inverse approach to the first track, still being fairly sparse compared to the rest of the album, but swapping an acoustic guitar for a synthesizer and adding some punchy, electronic drums. I actually get a bit of a Kid A/RadioHead vibe from this song in particular. This track is very straightforward thematically, about heartbreak and distance from someone who had loved.

Now That I’m Older  is, a dense hymnal like song, with incredibly beautiful harmonies, some of the best on the whole album, backed with harps and pianos. Sufjan sings regretfully of what he wishes he had known and done.

Get Real Get Right  is inspired by an artist who struggled with mental illness, and whose work blended spiritual elements with space. Synths fade in and out, and woodwind instruments sneak in occasionally, leaving and entering quickly. A keyboard, rather than the sporadic percussion, helps keep a sense of rhythm and progression here, changing key between each segment of the song.

Bad Communication  serves a bridge between the intense Get Real Get Right. The brief track is about struggles with rejection or being ignored. This might be the weakest track on the album. The approach and the ideas here have already been explored better in other songs.

This leads to the next track, Vesuvius, named after an ancient volcano that has catastrophically erupted several times. Beginning with just a hushed piano line and a quiet harmony, before quickly adding prominent, bassy synth lines, along with drum machines and arpeggio synths during the chorus. Lyrics here deal with futility, destruction and guidance/doubt of spiritual forces. Flutes and bells help close things out, played alongside a bass guitar.

All For Myself  is another interlude type track, but an extremely strong one. Background vocals playthrough out, fading in on an “ooooh” and out on an “aaaah”, and Sufjan sings loudly alongside several other vocalists, creating a denseness that is more akin to 3-4 guitars at once than people singing. Electronic drums squelch in the background, and a synth buzzes in during the chorus, but the focus here is clearly on the outstanding vocal performance. On this song, Sufjan sings about making the most of fleeting or final moments, and acting on a sense of selfishness to please oneself.

While the whole album is claimed to be written about Sufjan’s experience with a viral infection that impacted his nervous system, the song I Want To Be Well  is the song that sounds most connected to this experience. The song is driven along electronic drums, and a layering of woodwinds and synthesizers. Foregoing the slow crescendo builds of most of the other songs on this album, only slowing about midway for a brief segments of acoustic guitars and a softer coo from Sufjan. Background vocals and electronics are added briefly too. This only serves as a brief break before launching back into an even more dense arrangement, adding in a fast drum roll, and Sufjan shouting “I’m not fucking around” several times over. The most intense song on the album ends with piercing synths.

Impossible Soul  is the best song on this album and maybe the most impressive of his entire career. Pitchfork summed it up extremely well when they commend Sufjan in their review, for effectively doing a wider variety of styles of music in a single song that most musicians attempt in their career. Honestly, even listening to it now, I’m having a hard time describing it. My words can’t do it justice. Go listen.

Taken as a whole, Age Of Adz  is masterful. Its extremely emotional and difficult to listen to at times, but beautiful arranged and utterly unique. The only other musicians who have come close to creating such an effective synthesis of electronic elements with their existing style of music was RadioHead with Kid A. And while I doubt this album will receive recognition close to that, it is still well worth the time of any open minded music fan.