Rick and Gailie – The Lost Album 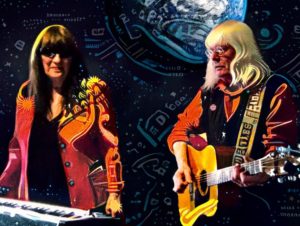 Rick and Gailie have been staples of the local music scene in Peterborough for a good time now. I’ve had the pleasure of getting to know them ever so slightly through the day job, and they really are fantastic people, old school flower-power hippies from a time when it mattered. And this world could definitely do with some peace and love right now.

For years they regularly played The Black Horse Pub on George Street, but a short while ago Rick was diagnosed with non-Hodgkin lymphoma. But that didn’t stop him from completing his long awaited release, The Lost Album, a beautiful blues-infused homage to the music of the 60’s and 70’s. The album consist of all original material written by Rick and performed by many fine local musicians.

The album opens with a wonderful backdrop of guitars and synths, as the song expands and grows, eventually encompassing the listener in the sonic soundscape. Ricks singing and playing is passionate and powerful, really emphasizing the layered harmonies of the backing vocals at times. The second track Change The Game  is a fantastic blend of classic songwriting skills and pure musicianship, as the band jams off into space at the end of the song showcasing everyones talent.

Most of the lyrics are based around your standard tropes of the 60’s lifestyle; Peace, love, happiness, and a desire to live in the moment and embrace everything as an opportunity. At least that’s what I’m getting while listening to these songs. The use of effects on Ricks singing are very tasteful and serve to the music and words, creating a wonderful sense of psychedelia such as the song Jacob Marley, which also utilizes real world sample to create a sense of atmosphere to follow the story.

I really only have one problem with this album, that it creates a sense of regret for being unable to experience the era which birthed this music. Listening to this brings me back to my discovery of artists like Hendrix, The Beatles and Grateful Dead, hearing the blues for the first time and hearing people speak through their instruments, not just their words. All while being conveniently packaged in 16 tracks and a run time of just under an hour. Definitely a worthwhile listen for the modern day hippie-in-disguise, you can grab a copy for yourself right here.