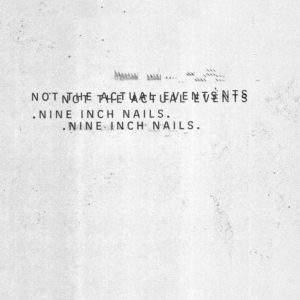 I owe much of my love of music and the desire to blend organics and electronics together to Nine Inch Nails. So I should probably warn you that there will be many more reviews of their music, as they’ve taken it upon themselves to revisit much of their back catalogue. For two reasons, to remaster their less-than-polished releases (which I don’t understand, the raw brutality of the music is pretty key to their sound), and to draw inspiration for new material. Not The Actual Events was released in 2016, and ushered in a wave of new releases, including a re-imagining of their hit album, The Fragile. But that one is for another day.

The first thing that is apparent is the rawness of tone. Compared to the last release (Hesitation Marks), things are much more aggressive and noisy in origins. The opening track Branches / Bones is full of buzzing guitars and synths, over-processed vocals screaming and stretching across time, and a drum sound that seems gigantic yet buried in the mix. Even though things are so completely chaotic, it all serves a purpose to set the tone for the rest of the album. It’s a much needed call back to Reznors old productions, embracing the limitations of technology as creative elements themselves.

The Idea of You stands out among the other tracks as a perfect blend of the ambient soundscapes with whispering vocals in the beginning, creating a sense of tension, and a sense of pure rage and anger, as the song explodes into loud chanting screams accompanied by chaotic drums, all with the same repetitive guitar riff filling in the background. The song moves back and forth from slow uneasiness and anticipation, to making the listener want to kick in every door they come across, just because they could.

As fantastic a record as it is, I just wish it was longer. There’s so much potential to explore with the distinctive sonic characteristics of this record, but it stops short at just over 21 minutes. Granted it is a 21 minutes that most people would not be able to handle, due to the purely assaulting nature of the music. And even though it seems they’re revisiting their old aggressive era of their music, sometimes a step backwards is in the right direction.